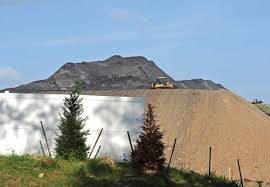 The Cycle of Energy, Waste, and Community Disinvestment

Pt. I: The Case of The East End Landfill

In September of 2010, I accepted a position as a community organizer at an urban center in the far East End of Richmond, VA.  My position centered on facilitating a community engagement and planning initiative around areas important to community residents and leaders.  As we conducted a community engaged participatory assessment alongside community volunteers, civic association leaders, consultants, and center staff, issues similar to communities with histories of institutional racism, urban renewal, and economic disinvestment rapidly emerged.

Community members, civic association leaders, and residents crafted an ambitious community vision over the next six months setting goals, establishing community work teams, and bringing organizational and institutional partners from various sectors.  Due in no small part to its history played out in over 40 years of organizing, the community was able to organize quickly around the areas of service, community legacy, education, housing, economic development, and parks and infrastructure.  Community leaders had not idea that environmental justice would complicate this new chapter in the community’s history.

Just over two months of my hiring, I received a call from a community advocate asking me if I knew what as going on at the landfill a mile from our community center.  There were four active landfills within a two mile radius of our community center.  Given the community engagement process we were undertaking, I had not been focused on the activities of any of the landfills in our community.  This particular landfill, a construction and demolition debris site, had just had just failed a state inspection and had their permit revoked, because they had been using coal ash, otherwise known as coal combustion byproduct, as structural fill in their landfill.  They also had so much of the toxic by product on site, it created a black pile higher than the landfill, above the trees, that could be seen for miles.

The fierce advocate told me that there would be a hearing in two days.  Luckily, there was a civic association meeting that same evening.  I was able to do a quick bit of research, and facilitate an extensive community dialogue from community leaders in a public forum that same night.  This would be the beginning of a three year organizing effort to remove toxic chemicals from the community.  Two days later, in a rare snow storm in Henrico County, VA, we were able to get 40 concerned citizens along with advocates, local, and state politicians to the meeting to testify against the East End Landfill Company’s appeal to the County Board of Zoning.  Their appeal was denied.

The next few years would not only be focused on the neighborhood initiative, but would also involve attending hearings of the Department of Environmental Quality (DEQ), management of the East End Landfill Company, advocates, and would entail many hours of canvassing, community strategy sessions, and tours of the site.  Eventually, DEQ, local legislators, and the landfill company began to get the message.  Once the community galvanized around this critical environmental justice issue, the halls of power listened intently.  Local politicians made an arrangement with East End Landfill company with community input to take the coal ash off of the site.

The landfill company went through a complete overhaul and was soon extending olive branches to the community and local politicians.  They rebranded themselves, East End Resource Recovery, and began emphasizing their green technology and the environment.  They were also quick to point out in tours of the site with center staff and community members that other landfills in the community were depositing coal ash into their landfills.  As a part of the final deal, the coal ash was also transferred to another landfill in a neighboring county, and the permit renewed by the board of zoning.

Part two will focus on mountain top removal, the history of economic exploitation in the Appalachian region of southwest Virginia, and its relation to urban neighborhoods across Virginia.

Previous Post The Critical Difference Engagement Model: Next Post The Power of the Pantsuit: The Women’s March on Washington