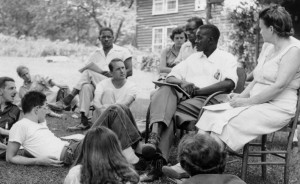 This is the third and final portion of a three part series on navigating difference in community organizing and social justice work. Targeted at members of my own community, it covers seven essential tools in moving through the process of ally consciousness. Part one centered on acknowledging privilege and unearned social power. Part two focused on humility and empathy, and the final portion covers the ally process, leadership, facilitation, and making amends.

In considering learning around leadership principles, people like myself, white, able bodied, heterosexual, cisgender males have historically been socialized to speak our minds, view ourselves as worthy, intelligent, competitive, and confident. We have also been taught a version of leadership dominated by white, able bodied, heterosexual, cisgender males. Not only has the academic literature on leadership come largely from the field of business, again dominated by white male leaders, but even in traditional gender norms, men are viewed as leaders of the house, and in possession of those essential qualities that make superior leaders. Within the context of building an equal, inclusive, and participatory organization, these same attributes can perpetuate the same oppressive patterns that as allies we claim to be against. They often manifest themselves in very subtle ways, such as the privileged people taking on most, if not all, of the leadership roles in the organization. It might also take the form of a certain group of people dominating dialogue in meetings, discussions, or planning sessions. This is why we must be careful, because as harmless as they may seem, these traditional leadership constructions are based in patriarchy and white supremacy. For this reason, it is imperative that as we work towards a socially just world, we actively reject further internalizing those oppressive leadership norms within the organizations and institutions in which we work.

It is for this reason that we must begin to reshape our definitions and frameworks for leadership from those based in hierarchy, internalized white supremacy, and patriarchy to support, inclusion, facilitation, skill building, and leadership development in others. We do this through honing our facilitation skills, practicing informal leadership, and working on skill building in ourselves and others. We also do this by allowing others to lead us, listening, leading from the rear, and sharing our thoughts and experiences with those we stand beside. This will enhance, strengthen, and guide our process as an ally.

Being an Ally is a Process

Being an ally is not an identity. It is a process. We cannot effectively go through that process if we do not acknowledge that there is much to learn. There is a lifetime of learning that needs to take place, and it’s not a place where we ever arrive. This is particularly vital to remember when taking part in difficult dialogues. Often allies make the mistake of running future allies out of the room when they don’t “get it”. Everyone is in process, and we can be an important bridge to critical consciousness and self-actualization for others. We all have a process to go through, a road to walk, with glaring misconceptions and assumptions to relinquish. No one ever comes to a point of arrival. Going through the process of allyship can be one with many fits, starts, bumps, bruises, and sleepless nights. It’s a part of the deal. We learn by walking the road, remaining teachable, listening, remaining curious, and building authentic relationships. It’s also critical to remember that being an ally is different than being that white guy that gets it, because in fact, that white guy doesn’t exist. We may never reach a point of understanding, but we can reach a point of acknowledgement and recognition.

Forgive yourself, let go of guilt, and quickly make amends

Inevitably, we will make mistakes in our work. Integrating these principles into our organizing takes time because it takes conscious changes in our thinking and behavior. Forgiving ourselves, letting go of guilt, and quickly making amends keeps the focus on social change, deconstructing oppressive systems of power, and reconstructing social arrangements based on equality, justice, and fairness. We will fail, but our successes will be greater if we are able to stay humble enough to clean off our side of the street and change our behavior. This means taking responsibility for the impact of our behavior within the organizations in which we work. It is an imperative. We must take responsibility, and change our behavior. The work is too important.

Previous Post Is Netflix the Most Family Friendly Company to Work for in the US? Hardly. Next Post Teaching Hurricane Katrina 10 Years Later