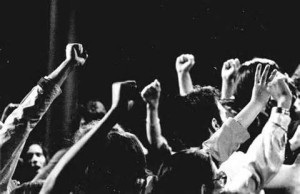 This piece is part of a three part series on navigating difference in community organizing and social justice work. Targeted at members of my own community, it covers seven essential tools in moving through the process of ally consciousness.

The shock of what has been happening in our communities related to race has reverberated across the country, and come to a frenzy from events in Ferguson, Baltimore, South Carolina, and in our own back yards. This did not emerge from nowhere. It takes a clear, honest examination of our own experiences as white people in comparison to people of color in America to recognize how we came to where we are.

Being a white teacher at a Historically Black University (HBCU), I have a unique perspective on the effect of the events playing out in our communities across the country. Of course, I view it from a skewed lens often blurred by my own white privilege, but I feel compelled to write about my experiences due to the way that I see other white people, some in my own community, reacting to these events. As events in Ferguson unfolded in December 2014, I was teaching a unit on criminal justice. The news came that the district attorney in Ferguson, Missouri was going to make an announcement regarding indicting Darren Wilson in the shooting death of Michael Brown. I couldn’t help but realize the irony of the situation I had found myself in, and quickly realized that my African American students could have taught me more about the racist criminal justice system on that day than I could ever hope to teach them. On the way home, I called one of my best friends, another young university assistant professor who had worked in community organizing. Neither one of us, both white, could mask our debilitating disappointment to what we were witnessing on the news, in our classrooms, or among white people in reaction to the events. We were both fairly ashamed to be white that day.

After some hard reflection, conversations with colleagues, and time, I was reminded of what I already knew. The racism we are dealing with and working against is historic, systemic, and institutional. It comes out in individual interactions, but that is not the limit of its scope. To begin to change it, we must change the way we talk to each other, change the way we interact with one another, and acknowledge that while people of privilege play an important role, that’s not where it ends. We need to be able to take the risk of pushing the envelope in the organizations in which we work and the localities in which we live by being active in political struggle and in allowing people who have traditionally been without voice to have a one. Sometimes, this means remaining silent. I’m not advocating for a culture of silence around racism. My stance is that if we are in a room talking about racism, power, and/or oppression in dialogue with others, we enter silently, we actively listen, and we allow others to lead and guide the conversation. It is in doing this that we accurately learn new ways of knowing from others’ experiences. This is even true for me in the classroom. I am only equipped to ask challenging questions, bring out emerging themes, and facilitate dialogue. Based on my experience, I am not equipped to be an expert on what it means to be subject to white racism. As Paulo Freire points out, I wear the scars of my miseducation. It’s through entering silently, listening to learn, and building authentic relationships that we can develop trust and begin the process of becoming useful allies in the struggle against racism and oppression.

Unpacking our invisible knapsack as Peggy McIntosh calls it, relinquishing our privilege and our internalized white supremacy, and using it subversively will begin the process of healing. This means considering what we are willing to give up so that others can obtain equal power. What are you willing to give up? What am I willing to give up? This series outlines seven essential components of being a useful ally in the struggle for social justice, collective liberation, and equality. The first, acknowledging our privilege, lights the way for the others that will be covered in subsequent posts. Without it, our senses skewed, and our analysis of history and oppression off target. It is where we begin the work. 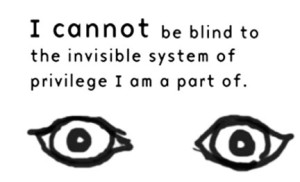 Acknowledge Privilege
Privilege is unearned social power. It is the opaque underbelly of oppression. One cannot exist without the other. I have sat through many dialogues on race throughout the years. In one in particular, I remember a young white woman adamantly claiming that she was not privileged. On another occasion, I remember co-facilitating a dialogue where a white person claimed that privilege could be earned. When I sit in rooms where I hear these statements being so honestly expressed, I’m reminded of how far we have to go in critiquing our own experiences as white people in America.

The fact of the matter is that there are unearned social privileges that go along with being white in our society. Many of these are invisible to those of us who experience them because they have never been denied us. For example, even though I grew up on the lower fringes of the middle class in this country, my father was provided assistance through the government in purchasing his first home, the house in which I experienced a large part of my childhood. He was not redlined or excluded from a loan based on his race. He was not relegated to living in certain parts of town because of his race; he, and then I, had access to quality public education and a stable job in large part due to our whiteness.

This does not mean that my father is not a hardworking man. In fact, as long as I can remember my father worked six to seven days a week, and was gone many evenings throughout most weeks because of his dedication to his work in the church. He was steadfastly committed to living a life of service to others in ministry. His position in his work from a socio-economic perspective is due to a combination of his hard work and his privilege.

It’s complicated and often very difficult to unpack, because more often than not, what we get as white people is often the result of a cloudily complex mixture of privilege and work. How, for example, can we ever correctly calculate the many privileges that allow so many white Americans access to decent education and institutional incentives that help our “hard work” manifest into economic security? We begin to impede our own critical race consciousness when we deny that white privilege plays a role in some of the social advantages we have. It also diminishes our ability to speak truth to power and work collectively with people who are different from us towards our liberation, when we claim to be blind to the unearned social power our skin provides.