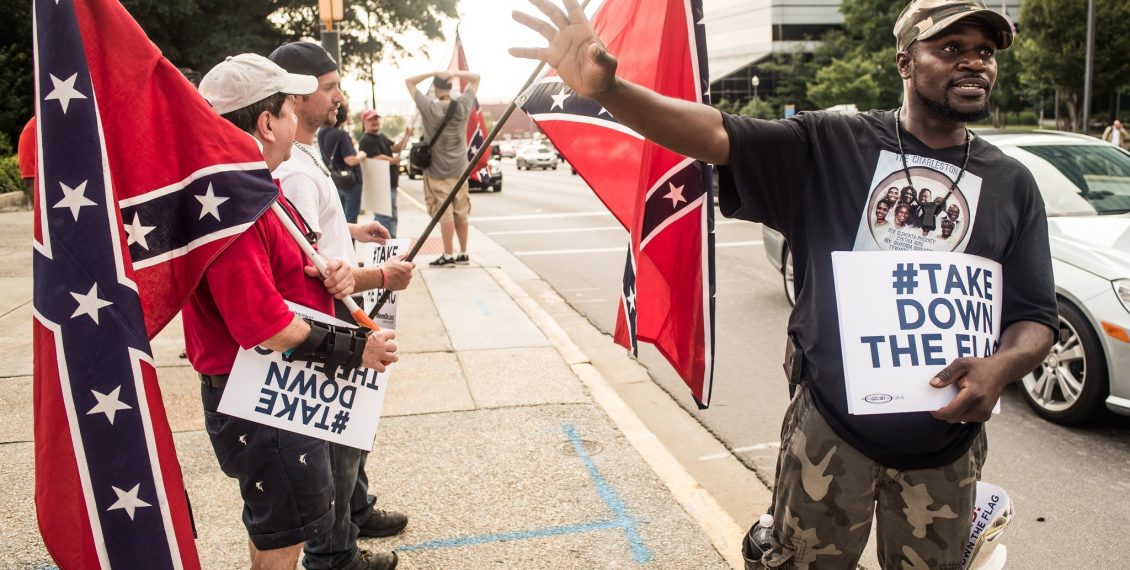 Pt. II- The Cornerstone, the Flag, and the Heritage Myth

In my last post, I discussed the ubiquitous branding, reframing, and consistent shaping of public memory perpetuated by media images, and their effect on collective cultural understandings of history and identity.  Centering analysis on the confederate flag, I connected its use in our corporate media, its contested meaning, and its imprint on southern popular culture with my own experience as a white child growing up in the ex-confederate south of the 1980s.

This current piece focuses less on the media based mythology associated with the confederate flag and instead turns to concrete events in history linked to the origins of the confederacy, the flag, and its resurgence in the post-war era as a counter to civil rights. It acts as a contrast to the heritage narrative and uses concrete historic evidence to dismantle this widespread misconception that the flag is a symbol of authentic rebellion and southern heritage.

Three weeks after Lincoln’s inauguration on March 21, 1861, Alexander Stevens, the Vice-President of the newly established Confederate States of America, gave a speech in Savannah, Georgia outlining the ideology and values on which the new government would be based.  Known as the Cornerstone Speech, it referenced Thomas Jefferson’s remarks regarding the need to find ways to end slavery as a practice if the nation were ever to truly live up to its values as a people. Stevens said:

“Our new government is founded upon exactly the opposite ideas; its foundations are laid, its cornerstone rests, upon the great truth that the negro is not equal to the white man; that slavery, subordination to the superior race, is his natural and normal condition. This, our new government, is the first, in the history of the world, based upon this great physical, philosophical, and moral truth. This truth has been slow in the process of its development, like all other truths in the various departments of science.”

This speech holds such significance because of its inextricable relationship between the confederate dogma and its flag.  Because the Civil War holds such a prominent place in our history, national identity, and memory, its meaning will be debated as long as the causes of the war remain a point of contention.  The question of whether it is a symbol of oppression or heritage looms over its continued unfurling. 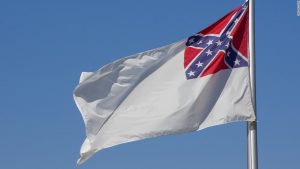 Historically, the confederate flag went through a few adaptations.  The first 1861 version was strikingly similar to the original stars and stripes so much that the “stars and bars,” as it was coined, quickly fell out of favor.  The second version, adopted in 1862, was similar to the currently contested version taken from the capital building in South Carolina in June 2015 by Bree Newsome.  It’s also this iteration that can be seen at protests in response to its removal from the flagpole in front of the confederate memorial chapel in Richmond, VA.  The main difference was that the background was white.  The design was created, proposed, and fiercely advocated for by a powerful local journalist from Savannah, GA named William Tappan Thompson who wrote a series of editorials making his case for this version of the flag.  He writes:

“As a people, we are fighting to maintain the Heaven-ordained supremacy of the white man over the inferior or colored race; a white flag would thus be emblematical of our cause. . . .such a flag…would soon take rank among the proudest ensigns of the nations, and be hailed by the civilized world as THE WHITE MAN’S FLAG”.

The confederate military leadership, along with the congress, soon became concerned that it resembled a flag of surrender.  It barely lasted a year.  That was when the familiar image of the blue cross with a red background became the defining symbol of confederate rebellion.  Days after it was chosen, Thompson also touted it as emblematic of “the cause of a superior race”.

Given the distinct ideological grounding of oppression on which the confederacy stood, and its most infamous symbol, it is no coincidence that white segregationists reignited their backlash against Brown v. Board of Education and the push for desegregation in the civil rights movement with this powerful symbol.  From the KKK in the 1920s to its reemergence in the 1950s in state courthouses and other public settings, the flag’s presence again became endemic within southern consciousness.  Given these circumstances, the question lingers:  what can be done to shift the narrative?

Previous Post Labor Day Blues: A Three Part Series on the Fight for a Fair Wage / Part Two: The Poverty of Exemption Next Post Just the “Good Ole’ Boys”: Moving Beyond the Dukes of Hazard’s Racism of Innocent Ignorance