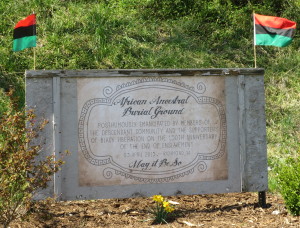 One hundred and fifty years ago this month, Confederate troops fled the Capital of the Confederacy, burning much of it in their wake as federal troops entered the city. President Lincoln soon arrived, greeted by throngs of Black men and women. On April 1-4, 2015, the city of Richmond commemorated the Civil War’s sesquicentennial by memorializing the burning of the city, Lincoln’s arrival, and the final freeing of the enslaved people who remained in the city.

Commemoration events were centered at the Capitol, designed by Thomas Jefferson and built by slaves, and just a few blocks to the east lie the former sites of the city’s African Burial Ground and Lumpkin’s Jail.  The notorious Lumpkin’s Jail was the city’s largest site that held slaves while they awaited auction, and slaves referred to it as the Devil’s Half Acre due to the brutality of its owner, Robert Lumpkin.  Both sites are part of a longer Slave Trail that begins on the other side of the James river where boats filled with human cargo would have docked.  Bound by chains and coffles, slaves would have made their way to the other side of the city most often in the dead of night so that city residents did not have to see – or smell – these humans who had been kept in tight bondage on a ship for perhaps weeks before their arrival.  The trail winds its way to what would have been a bustling business district in the early and mid-1800s – and much of that business would have been in the selling of people.

Between 1830-1860, Richmond was second only to New Orleans as the largest trading center for enslaved people.  While the state of Virginia housed the largest number of slaves on the eve of the Civil War in 1860, over 300,000 slaves who passed through Richmond were sold to plantations further south to meet the demands of sugar and cotton production there.

Today, a fenced in, grassy area denotes the former site of Lumpkin’s Jail and most of the African Burial Ground lies beneath Interstate 95.  When I first started taking students to the grounds a decade ago, only a small, homemade sign erected by the Richmond chapter of the Defenders for Freedom, Justice and Equality marked the site, which resided in a neglected, obscured area at the back of a parking lot.  Thanks to the efforts of the Defenders and other local activists, the parking lot, owned by Virginia Commonwealth University, has more recently been sodded over and more permanent markers now adorn the site where so many of Richmond’s enslaved and free people of color were buried in unmarked graves within sight of the city’s gallows.

While the result of preservation efforts have become much more obvious in the ten years that I have been visiting the site, the surrounding Shockoe Bottom area that housed many of the slave markets and auction sites has recently caught the eye of city politicians and developers.  In fall 2013, Mayor Dwight Jones publicly unveiled his plans for a minor league baseball stadium and accompanying economic development in the area.  The mayor’s plans earned Shockoe Bottom a place on the National Trust for Historic Preservation’s “11 Most Endangered Historic Places.”  While the mayor’s proposal is in retreat for the time being, the Trust notes the area’s great historic significance:

Shockoe Bottom’s invaluable resources cannot be seen – none of the buildings from the slave trade remain visible in these eight-blocks, and the artifacts of antebellum Richmond are now below the surface, out of sight. Shockoe Bottom should be protected as a site of conscience, a place that offers the public a chance to experience, and learn from, this dark chapter in American history. A path forward for Shockoe Bottom should include meaningful public involvement and expert archeological analysis so that the historical remnants of the slave trade now buried there can be seen and properly interpreted.

As the city recognizes the 150th anniversary of the Civil War’s end and the arrival of emancipation for the city’s remaining slaves, surely it’s time to properly recognize and preserve an area that has so much to teach us all.

Midori Takagi, “Rearing Wolves to Our Own Destruction:”  Slavery in Richmond, VA 1782-1865